Chronicle of a Mexico without a president

In Mexico, December 1, 2012, will be remembered as the day that an imposition was legitimized.

Enrique Peña Nieto — his name is often abbreviated in Mexico as “EPN” — took the reins of power in the context of deep indignation and amidst heavy state crackdown against crowds of protesters. A number of actions were planned in Mexico City to show the illegitimacy of Peña Nieto’s presidency, particularly given the unfair media attention he received and the electoral fraud that took place to ensure his victory.

On that day, Mexico’s historic center and the congressional buildings were a microcosm of the Mexican state as a whole. The Legislative Palace of San Lázaro, which houses Mexico’s Congress, appeared to be a giant fortress, deaf to the rubber bullets and tear gas grenades that the federal police fired at protesters. Nearby, the presidential palace stood on one side of the Zócalo, the main square of Mexico City.

Across the street from the palace, Alameda central park had been turned into a battleground between protesters and police. The violence forced the “embroiderers for peace” — a group of artists who had gathered to display embroidered handkerchiefs that symbolized those killed or disappeared during former president Calderón’s six-year drug war — to withdraw from their peaceful protest.

Meanwhile, over televisions across the country, Mexicans participated in a society of  spectacle as they watched Peña Nieto’s inauguration. Just outside the media bubble, however, shouts of indignation rose in the streets. At a restaurant on 5 de Mayo Street, Peña Nieto’s voice declared from a television screen, “Two thousand one hundred and ninety-one days are sufficient to lay the foundation to make Mexico a prosperous country.” In the meantime, the repression continued in the historical center of the city, resulting in more than 170 arrests, and another hundred injured, many seriously. All of the violence and outcry occurred just feet from the media spectacle that protected the so-called “imposition.”

As EPN lifted his right hand and promised to protect the Constitution, the story of a Mexico without a president began. The inauguration was marked by discontent and indignation in the streets, juxtaposed against the sense of denial — “nothing to see here” — taking place in a presidential palace living in a media bubble.

“I will govern looking out for the well-being and prosperity of the union, and if I don’t accomplish it, may the nation demand it of me,” Peña Nieto declared in his inauguration speech.

This speech and the government-controlled narrative of the day’s event have been widely broadcast. But the story of the day’s protests tended to be suppressed and distorted by official propaganda.

The protests against Peña Nieto’s inauguration began early on December 1. At 3:15 a.m., more than 100 people gathered below the Monument to the Revolution in Mexico City. They came from different groups, and one could tell that many of them didn’t know one another. On the ground lay a giant sign that read, “Peña Nieto is not my president.” Most of the protesters came with their faces covered and carrying recycled objects to be used for self-defense.

Just before 5 a.m., the crowd had grown to 300 people and the march began. They walked along Buenavista Street, until reaching Thoroughfare 1 North. Their destination was San Lázaro, the official headquarters of Mexico’s Chamber of Deputies and the place where Enrique Peña Nieto would make his first speech as president. The area had been closed off since the previous week, with medieval-looking fences and a massive police force.

Members of the Yo Soy 132 student movement that took the streets over the summer were not visible — at least not among the un-covered faces. The group had issued a public call on their official website to make a “human wall” around the San Lázaro Palace on the day of inauguration, an action they’d called “Operación #1Dmx #OcupaSanLázaro.” Yet, at the pre-dawn urban guerrilla march there were very few creative posters or joyful and unified songs; Yo Soy 132’s usual energy was nowhere to be found.

As the crowd marched someone cried, “Get rid of them all!” A poster signed by the Mexican National Education Workers’ Union declared: “Today we move from resistance to offensive.” The group passed by the neighborhood of Tepito, receiving disconcerted looks from the workers, who at 5 a.m. on that Saturday were out, drinking an atolebefore starting their work days.

“Tepito, listen, this is your struggle too,” proclaimed a few marchers.

When asked who organized this march, one person whose face was covered with a bandana explained, “Yo Soy 132 no longer represents this. We are more independent. I came as support for the Frente Oriente Pachuca, but there’s a little bit of everything here today.”

Little is known about the Frente Oriente Pachuca, nor about the Ejercito Popular Magonista de Liberación Nacional, a new armed revolutionary group that published its first communique on November 30, one day before the call to Occupy San Lázaro.

At 6:10 a.m., this group arrived at San Lázaro. There they merged with the teachers from Section 22 in Oaxaca, and the group began to march downtown. Some protesters quickly graffitied over a giant wall reading, “Congratulations to Enrique Peña Nieto, president elect,” with messages protesting the inauguration:

“You don’t represent me.”

“The people don’t want you.”

“What would you do if your daughter had been raped in Atenco?”

“Mexican people are on their feet for war.”

The sun had barely risen when protesters broke the first security fence down. The battle began: tear gas, rubber bullets and serious injuries. Molotov cocktails flew, and furniture became barricade construction. Neither journalists nor protesters were fully prepared for the repression. Few people knew how to deal with the effects of tear gas, especially not the workers and pedestrians leaving the San Lázaro Metro station. Suddenly, a trash truck carrying 15 passengers arrived that crashed into the security wall amidst euphoric cries.

At 8:37 a.m. someone announced that one of the critically injured may have died; some hours later information spread that he was in a coma. His name is Juan Francisco Kuy Kendall. Young members of Yo Soy 132 began arriving at the scene, explaining they “hoped to find people we knew.” They didn’t approve of the property destruction by masked protesters, they explained. From the Monctezuma Metro station came a contingent of Yo Soy 132 members who had wanted to protest peacefully but, in seeing the situation, decided not to enter the “fortress surrounded by police and converted into a battleground.”

Meanwhile, a large number of teachers from Section 22 in Oaxaca and other states of México remained outside of the San Lázaro area, waiting to march.

“We came from the state of Michoacán,” one teacher explained. “We are teachers, we belong to the National Democratic Committee of the SNTE. We are here because we are part of the National Convention Against the Imposition, that took place in Atenco this past July, and among the agreements we made, we agreed to come and hold a peaceful demonstration outside of San Lázaro when Peña Nieto’s took power.”

At 10:35 a.m. a “tactical withdrawal” was announced. Protesters issued military-sounding orders, amplified by the only microphone available. The teachers from Section 22 left San Lázaro and marched toward the center of the city.

At 1:09 p.m. Peña Nieto finished his speech at the National Palace, while someone wrote “Revolution flows in our hearts” on the ground at the entrance of the Palacio de Bellas Artes. The imposition had been legitimized and EPN announced his 13 goals and five core ideas. The first: “a Mexico with peace and justice,” a vision that contrasted strongly with the repressive violence outside.

That day in the media bubble, a new televnovela began in which Peña Nieto is the president. Meanwhile, in the real world, the day ended with a press release from the Allied Artists Yo Soy 132 on the day’s demonstrations, in which they affirmed their respect for the different forms of dissent expressed by the organizations present, emphasizing that “today, the members of #YoSoy132 act absolutely peacefully.”

The chronicle of a Mexico without a president didn’t end after 20 hours. December 1 was only the first paragraph in a larger story of struggle against an imposition that has only begun. 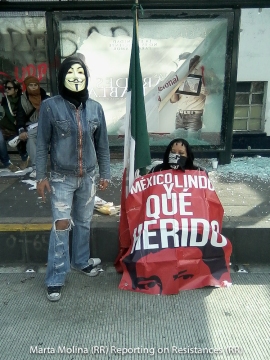 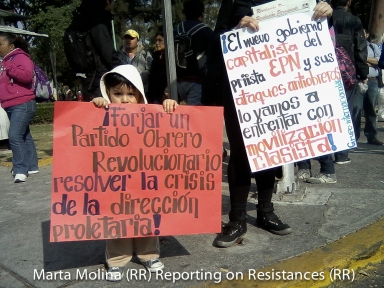